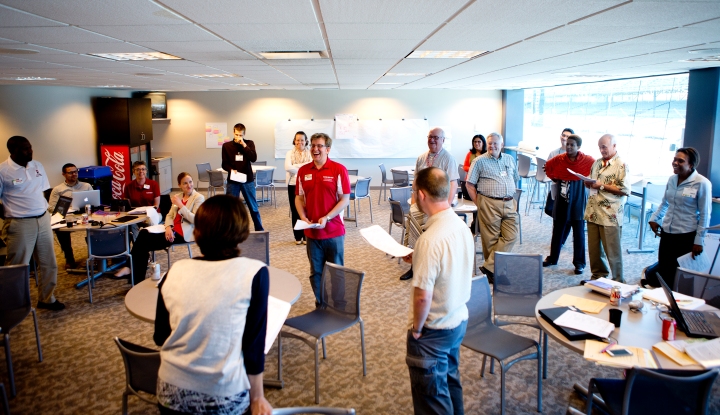 No one likes to get caught without a response in a challenging situation. Change agents know challenging situations are coming. One strategy for managing these scenarios is to practice ahead of known events. Practicing is supported by conversational models. Many conversation models exist; the trick is knowing how to deploy and practicing in advance.

Angry Colleague: Your project contains so many flaws it is doomed to failure, and is going to take down this program with it.
Change Agent: Wow, perhaps you are seeing things I don’t see. I hope we can discuss your concerns privately soon.
Angry Colleague: I don’t think you understand. The Board of this institution is going to fire us all if we go forward with your plan.
Change Agent: I can tell you have strong feelings about this project. Let’s plan to review those in private when I can give you my full attention. I will make an appointment with you after the meeting. Right now, I’d like to move on to the next point of discussion.

Thinking through and ultimately practicing such scenarios takes the emotion out of potentially charged exchanges. Change agents will regularly be having such exchanges. Developing this skill serves change agents well. It allows one to use what Meggin McIntosh calls the “pass the salt” voice (that completely neutral tone that implies neither support nor opposition) in the most challenging situations.

Some resources for guiding your responses include the Perfect Phrases series, Powerful Phrases for Dealing with Difficult People, and Conversation Tactics. Final note: practice includes saying the words out loud. Change agents have to hear themselves say these phrases to deploy them effectively.