When you are asking an organization to deviate from “standard operating procedure” (SOP), plenty of prickly weeds await.  Anticipating these is crucial to success: hoping for the best while planning for the worst.

The stickiness surrounding SOP is a wonder to behold.  I used to work for “the phone company,” and we thought we were highly creative.  We researched new ideas in giant buildings that looked like what’s shown.  This one was designed by Eero Saarinen — wasn’t that a perfect setting?  Well, maybe. When asked why he made it so gray, Saarinen quipped, “Have you seen the people who work here?” We were part of a machine, and earth-shattering change would mess with that machine.

One creativity guru we hired brought along a large tub of hats, so we could role-play at will.  He observed that our organization was the only place he had been, where participants could go all day with nobody ever trying on a new hat!  You get the picture:  the sense that we were open to new ideas didn’t fit with our actual actions. If you stuck out your elbow, you would hit something important.

The people who work where you do will feel issues with your new idea which you never anticipated.  As much as you are in a mindset that your plan will work, they are in a mindset that what they do now works.  Their current process is how they solve problems.  You would like to open their eyes.  But perhaps it also helps if they open your eyes.  Here’s how: 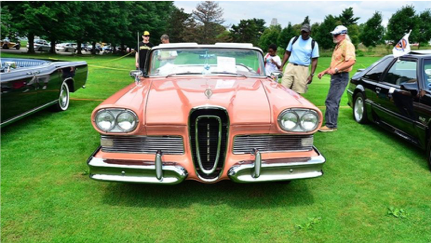 So, what’s “Edsel”?  It was the car of the future that Ford introduced in the late 1950’s.  Like most bad plans, it didn’t last long. As you can see in the photo here, the styling didn’t help, but there were other  reasons for its failure.  The engineering, manufacturing and marketing approaches taken turned out to be the worst ways they could have done it.  Even the car’s name was a turn-off.

In the Edsel brainstorming game, we emulate that predicament.  We write the plan title at the top of a flip-chart page, and draw a line down the middle.  On the left, we first conjecture, “What are the worst ways we could do this?”  Not surprisingly, that brings out the issues, real or imagined, that the people in your group might be worried about.  After we get a good bunch of those, and some good laughs, we then move to the right side of the flip-chart page.  “How could we overcome those problems?”  The potential opponents to your plan are now helping you to be successful!

If you can get them to walk out of the room holding action items, even better.

Let us know if this works for you!